What I left behind

A couple of the blogs I read do a "what I left behind" feature and I've fallen in love with them, so I've decided to add it to my blog as a feature as well. I'm trying to get over my feeling-odd-taking-pictures-in -places-no-one-else-is and just do it.  And I have to say I'm happy I did, it's more like I took you all thrifting with me. Plus you can finally see the good stuff I passed up. These pictures are from a few weeks ago and now you can finally see the sideboard I left behind, and I promise this will be the last post in which I talk about it. Anyway here are the things I left behind:

1. These Milk glass-esque containers.
I like milk glass but I don't really need more glassware in my house. 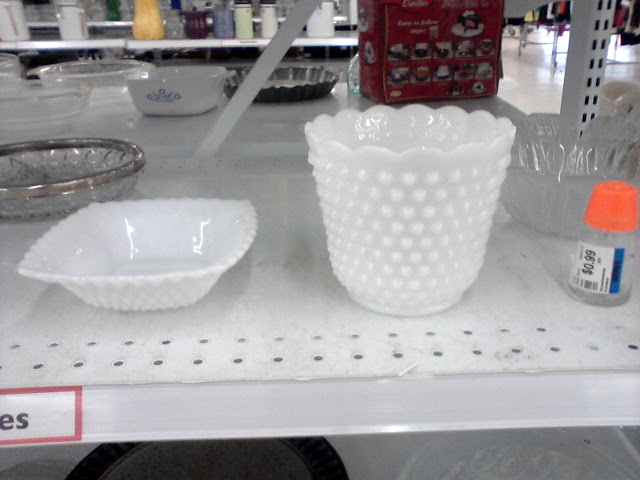 2. These (there were one or two inside) Forest Fancies Pyrex Cinderella bowls.
Honestly I'm just not a big fan of this pattern, though it's growing on me. I see it everywhere but it's never been cheap enough that it was worth buying, at least in my opinion. 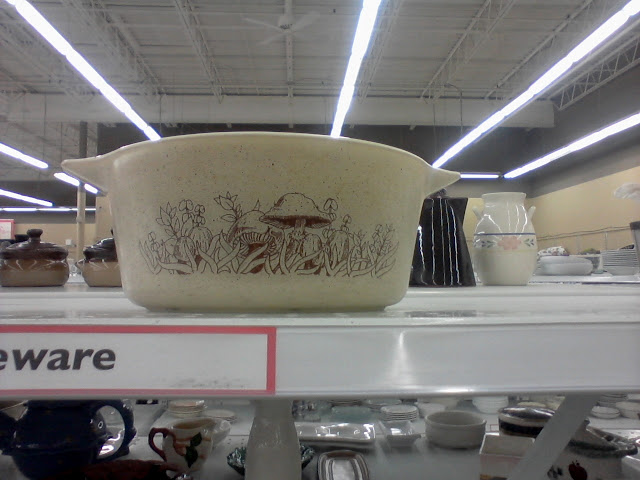 I liked these but I didn't really understand their point. They're not really deep enough to be good  cups and though I like the pattern it just wasn't enough to get them. 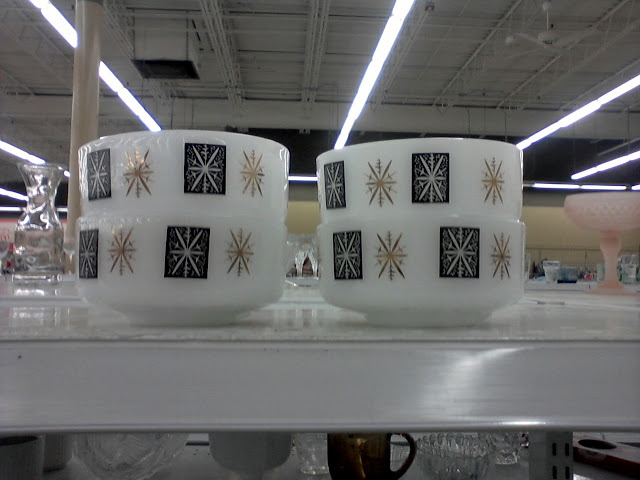 4. These Fondue pots
I just think fondue pots are fun and someday I want to have a 70's fondue party. These were cool but I see fondue pots everywhere, I guess i'm waiting to find the one I can't live without. 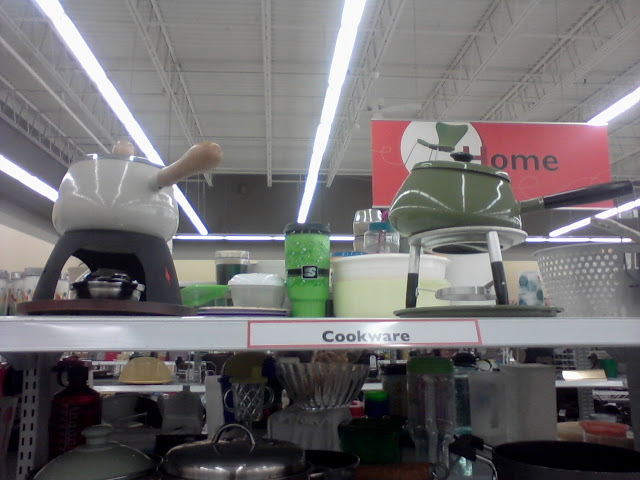 5. This Pyrex Red Hostess Oven and Table Set
Honestly this looks better in the picture than it did in real life. Though cool it was scratched to within and inch of it's life and had some chips so I passed. I also think it was a bit too pricey for the condition and I decided not to buy Pyrex in bad condition. 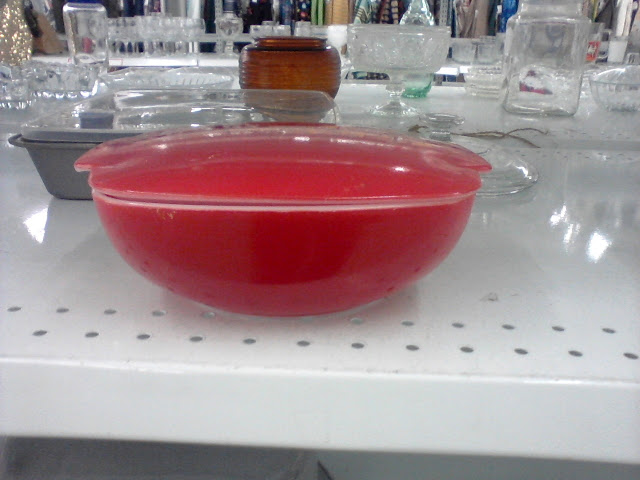 6 . The infamous mid century sideboard
OK I do regret not getting this. I don't really have a need for it but it is super cute. For some reason at the time it's $25.00 asking price was just a bit too much for me (I was being cheap that day) and I just couldn't reason buying it. So now it's the one that got away. 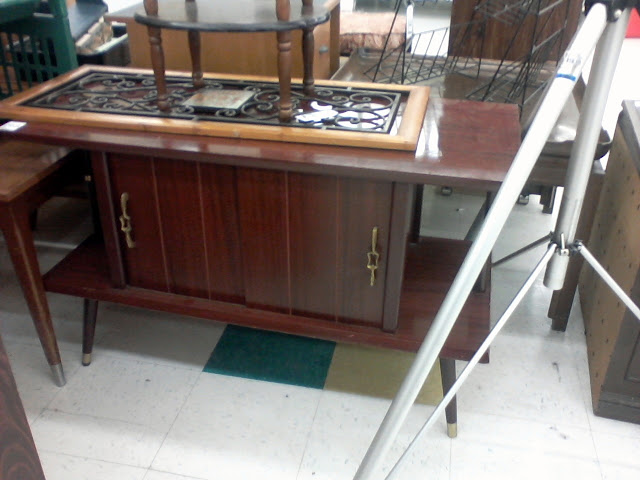 7. This mid century(?) side table
I thought the side table next to the sideboard looked a little mid century too and was kind of cute. 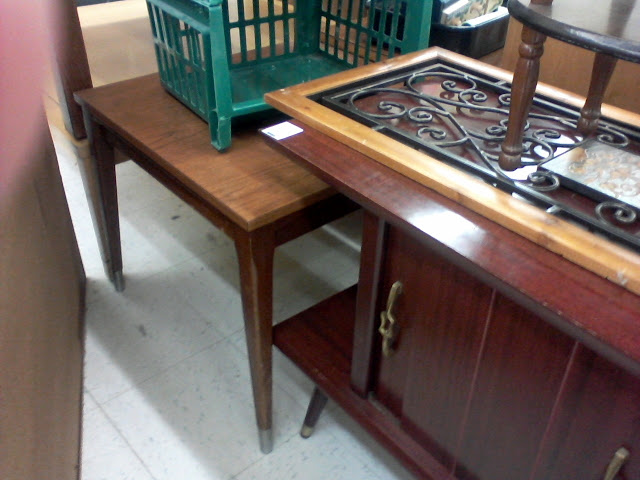 8. This funky owl lamp
This is another thing I kind of wish I had gotten. It's just kinda funky and random. 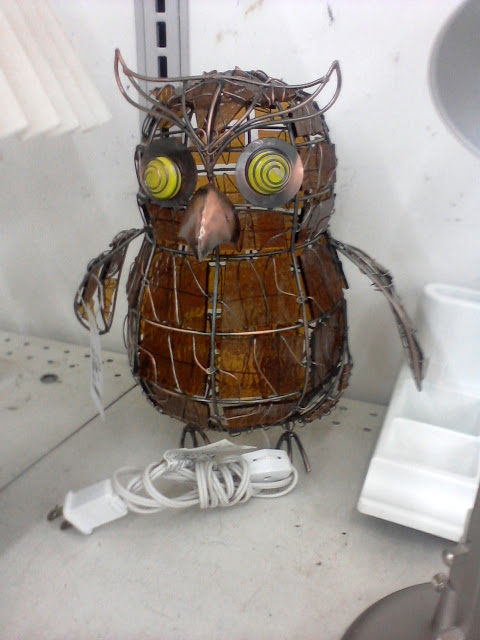 So that's what I left behind. That was actually a pretty good day thrifting, a lot of times there isn't that much to leave behind. did you leave anything behind recently? do you regret it?
Posted by Zorah at 2:50 PM