It's been awhile since I've done a thrift haul partly because I've cut down on my thrifting and partly because I haven't found a lot of amazing things lately. I've been thinking more practically and that I need to clean, organize, and donate the stuff I already have before acquiring anything new. So I wasn't really doing any heavy thrifting for a couple months. Of course during those months I didn't actually make any cleaning and organizing progress so... that's still a work in progress. But, some spring cleaning is definitely in order (only a few more weeks till spring y'all, hopefully). Anyway I've made my way back to the thrift stores in recent weeks so I figured I'd share some of the things I've found recently and that I found a while ago but have yet to share. 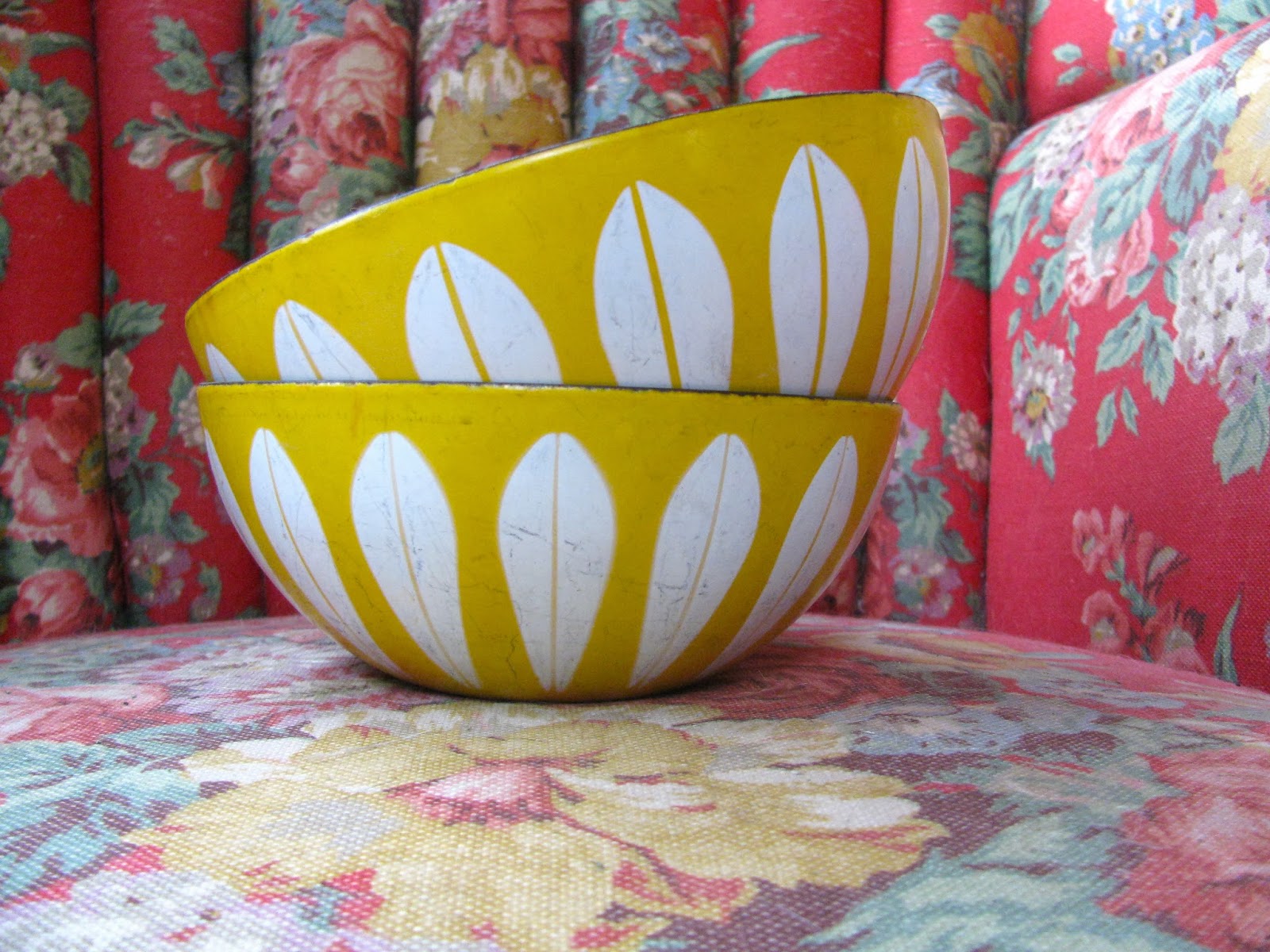 I got both of these bowls at a vintage store near Milwaukee last fall. I went on a mini road trip there to visit the SC Johnson HQ where they have some Frank Lloyd Wright buildings (more on that in a future post). Anyway we went to a flea market near Milwaukee and though it was a cool market there were hardly any of the vintage goods we were looking for. But, we had noticed a sign for an antique store nearby so we went and I found these bowls for $15 buck (total). The lady that ran the store wasn't really into mid century stuff so she had great reasonable prices. The bowls aren't in the best condition but for $15 bucks I couldn't say no. 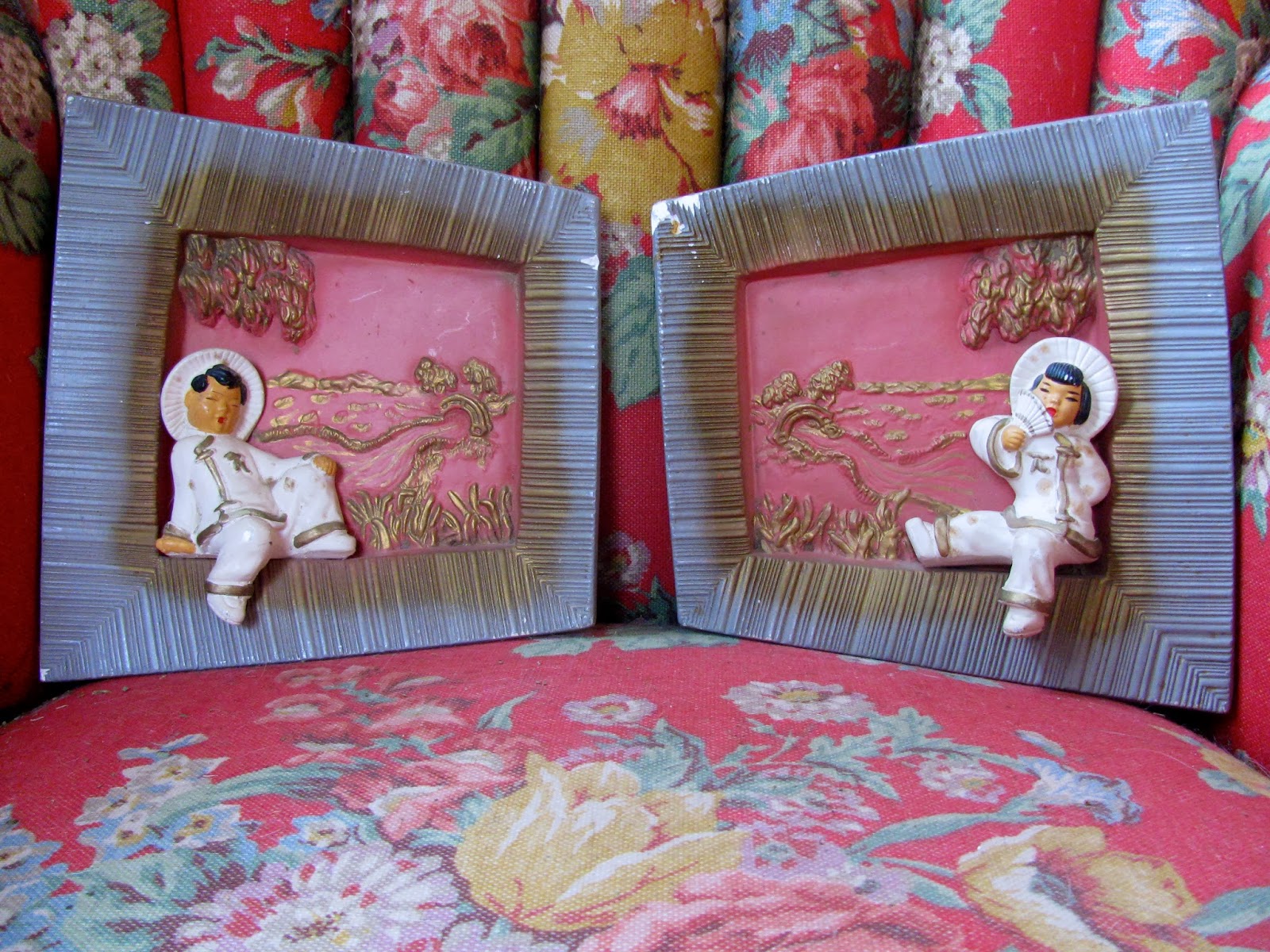 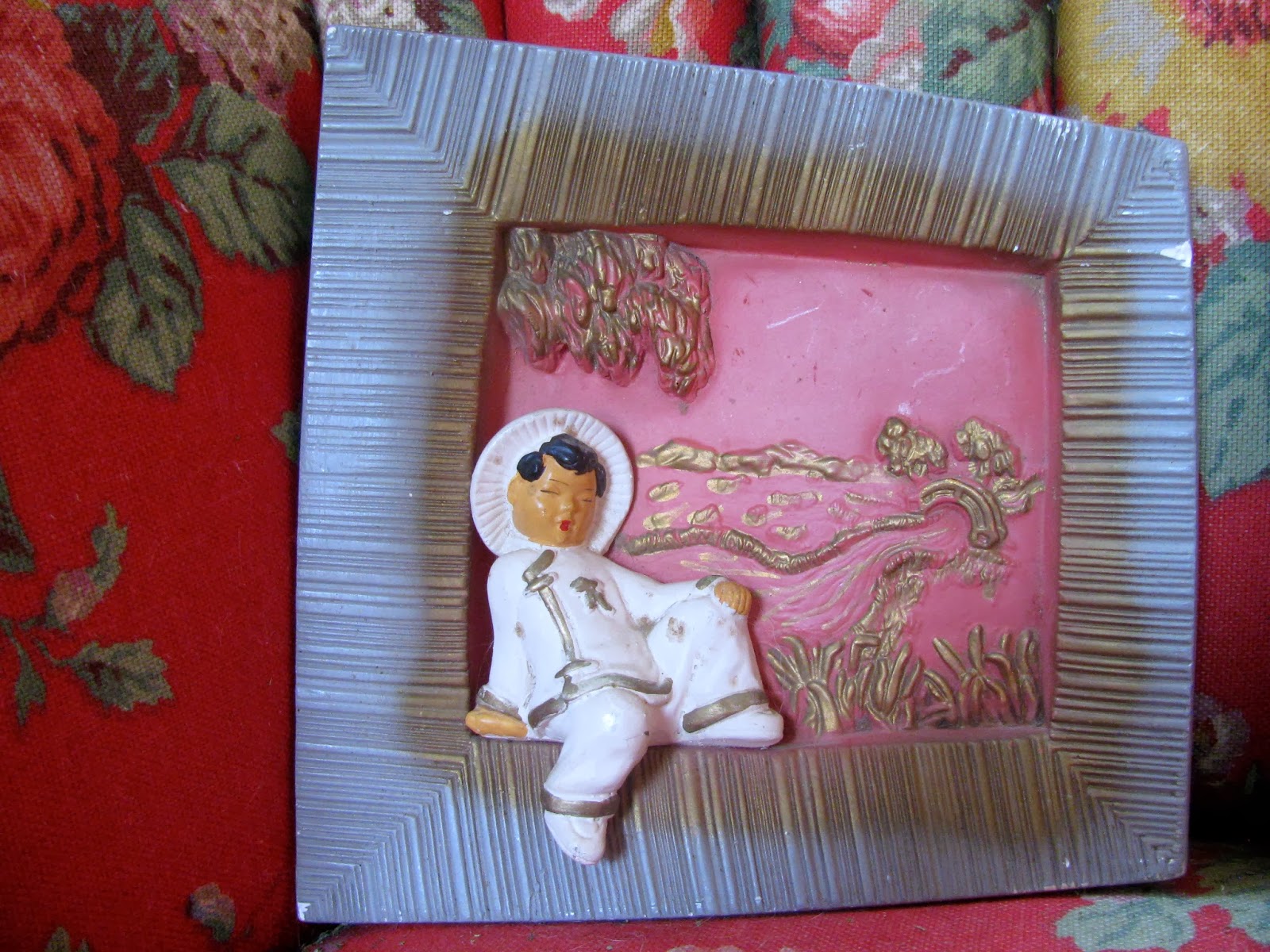 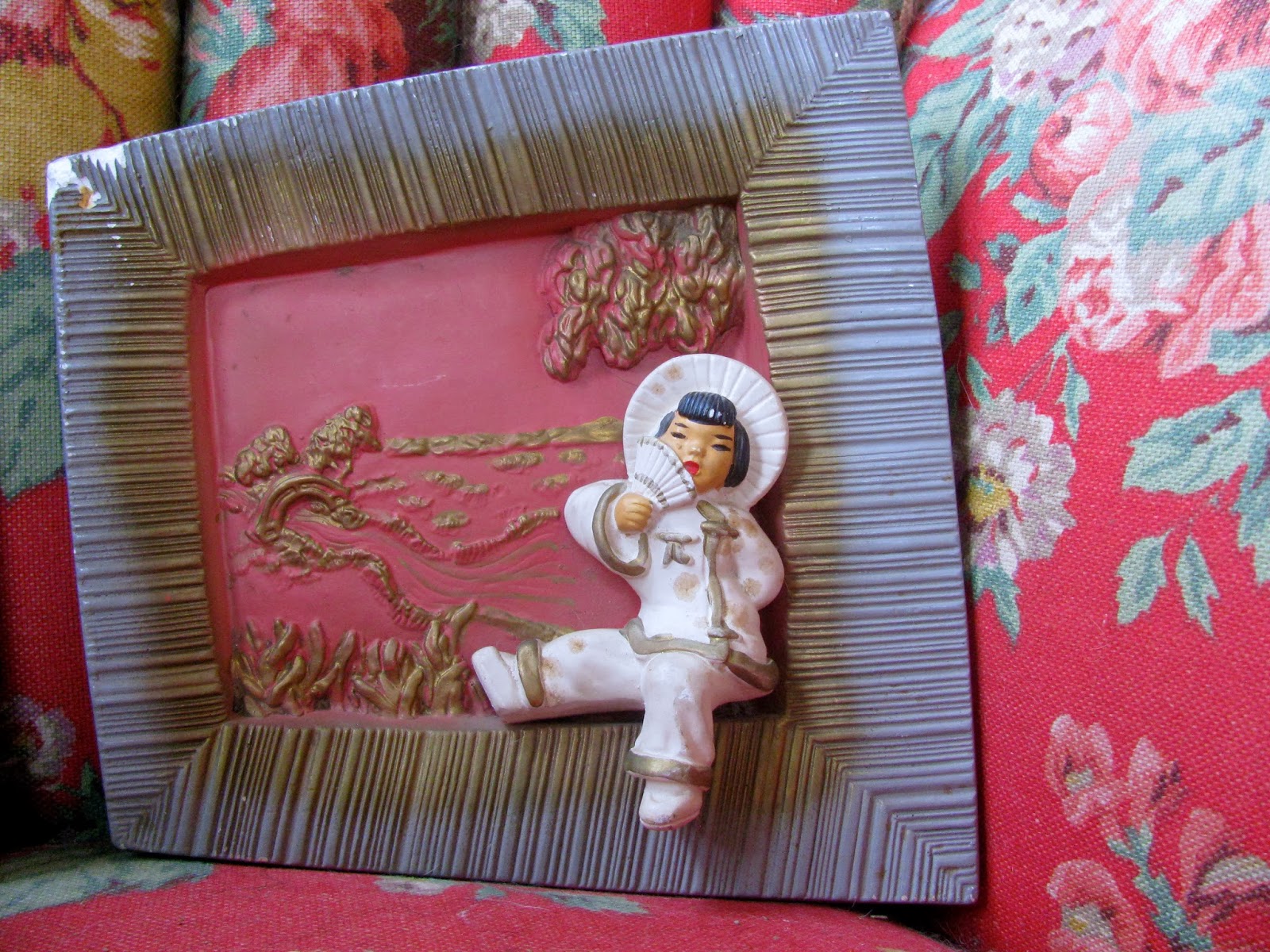 I don't exactly know what these are called but I stumbled upon them a couple months ago at Value Village and had to have them. It's not often I find such cool kitschy stuff at the thrift store so when I see something I like I pounce. These are also in rough condition but I actually don't mind that. They're totally cool and were pretty cheap so I'm totally OK with the cracks and nicks.

I fell in love with this embroidered wall art when I first saw it on Smile and Wave (here and here) . So when I saw it at Savers a few days ago I knew I had to get it. It's huge but I really like it, just have to find a place for it. 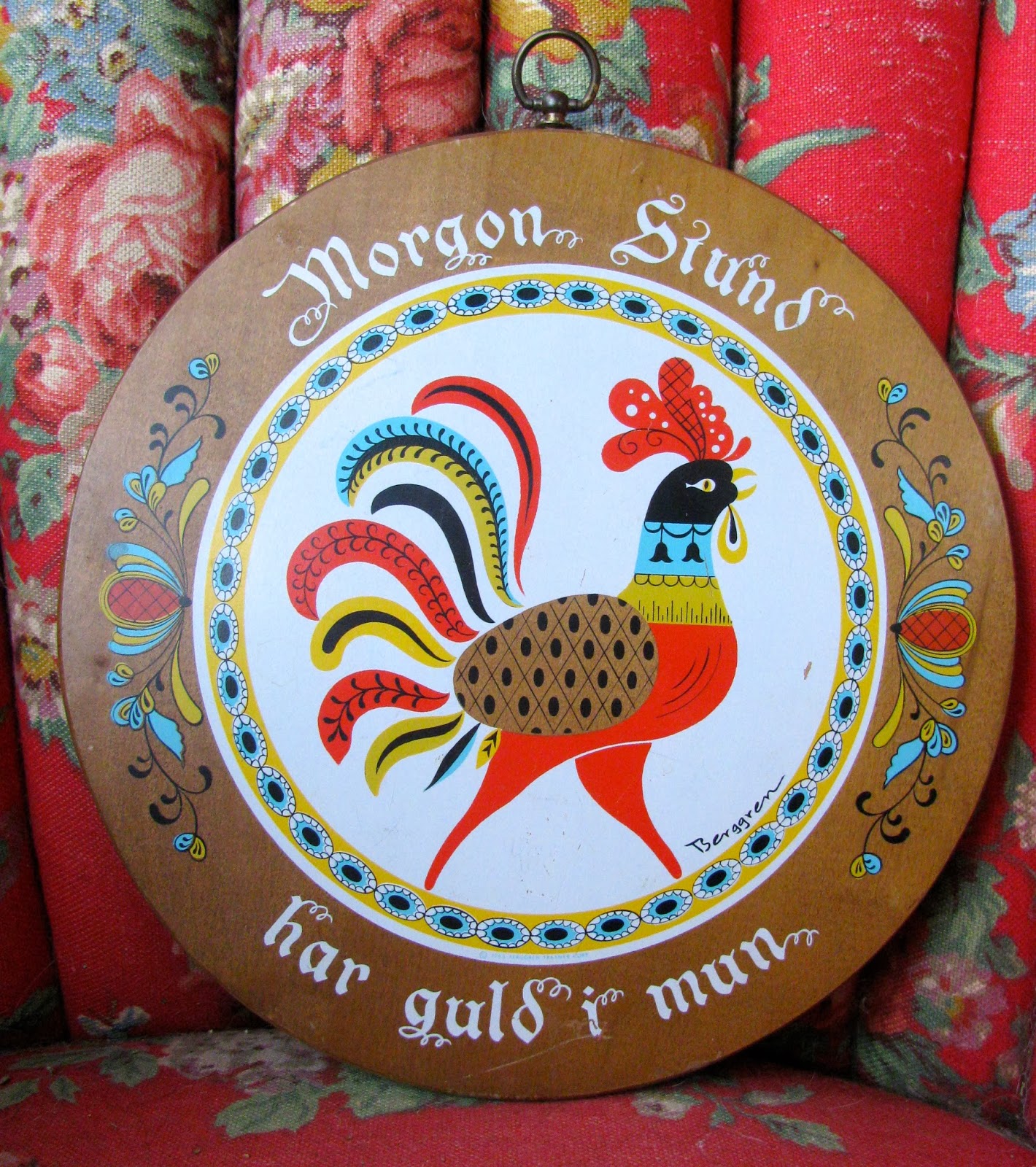 I  saw this while browsing a new Goodwill in my neighborhood. I really like the graphics, colors, and look of it. 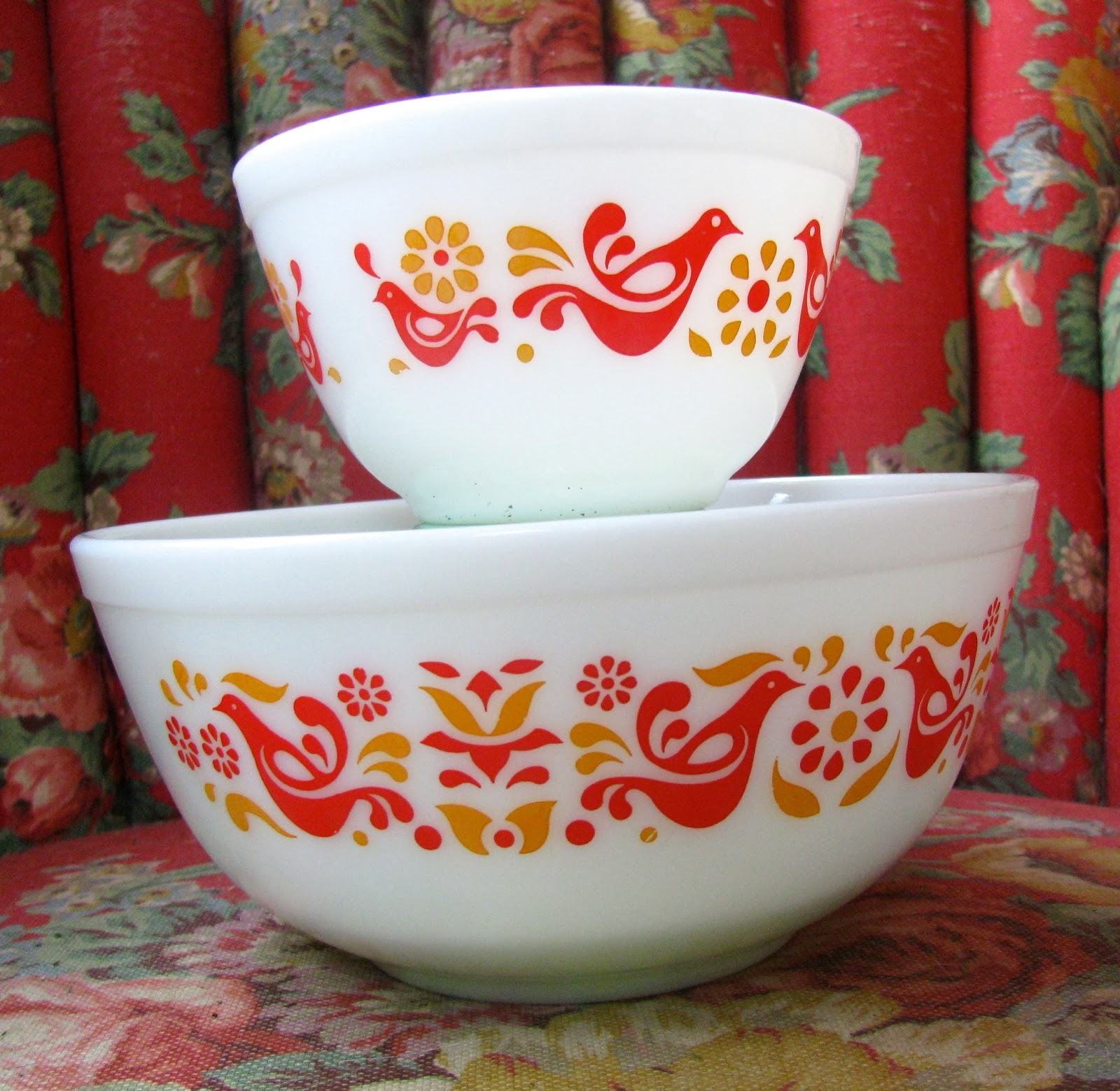 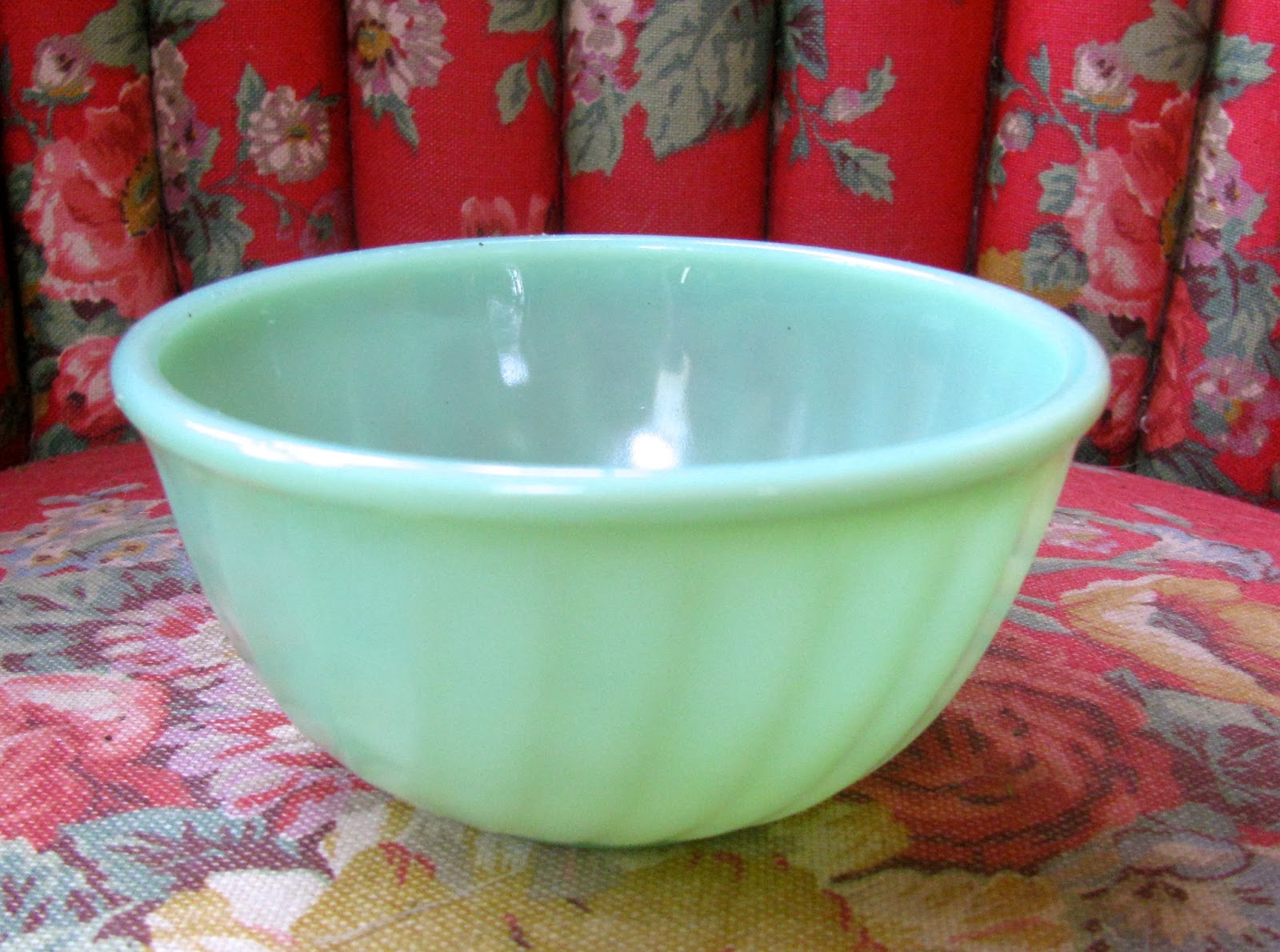 I pretty much only pick up Pyrex if it's in a pattern I like/love. I see a good amount of it but I just don't think it's worth it if I'm not into the pattern. I do however love the friendship pattern so when I saw this bowl I immediately grabbed it and true to it's name it came with a couple of friends. Tucked inside the larger friendship bowl was the smaller friendship bowl and a slightly larger Jadeite bowl!!! I've been looking for Jadeite in thrift stores ever since I saw Martha Stewart's envious collection in a magazine and wanted to start collecting it. Though I've seen it a lot at Antique/Vintage stores I've never popped on them. So I was very excited to find this one hiding amongst the pyrex. 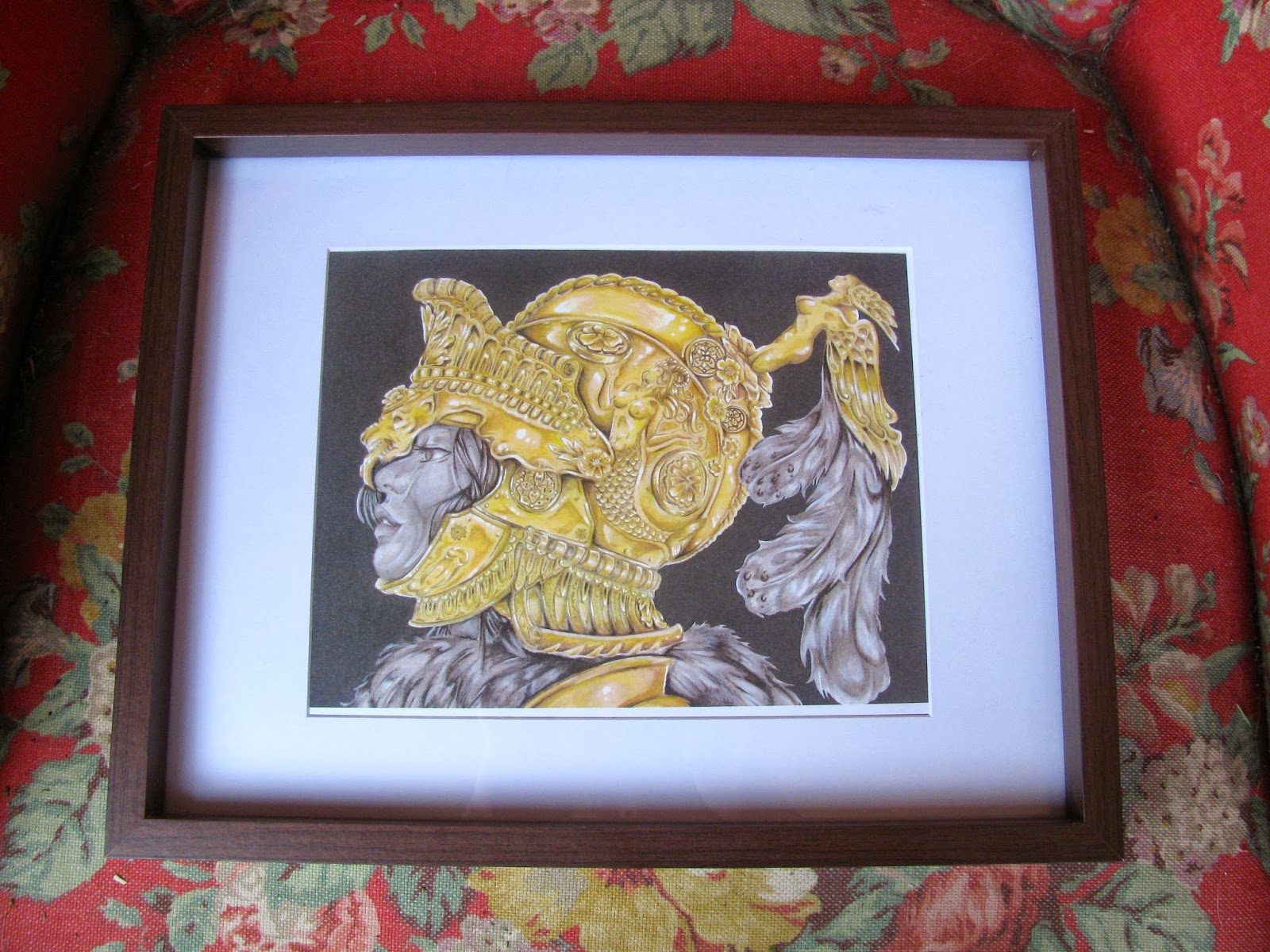 I bought two prints from my best friend earlier this year and have been searching for frames for them ever since. If you're into the art you can buy some of her prints here on her Etsy page (NSFW). I found this one and originally had it in mind for another print but this one ended up working in the frame better.  It's a simple frame from target that I got at the salvation army, the salvation army and goodwill are good places to get cheap Target frames (at least in my neck of the woods). I may find a better frame for it in the future but for now I like it and the search for a frame for the second print continues. 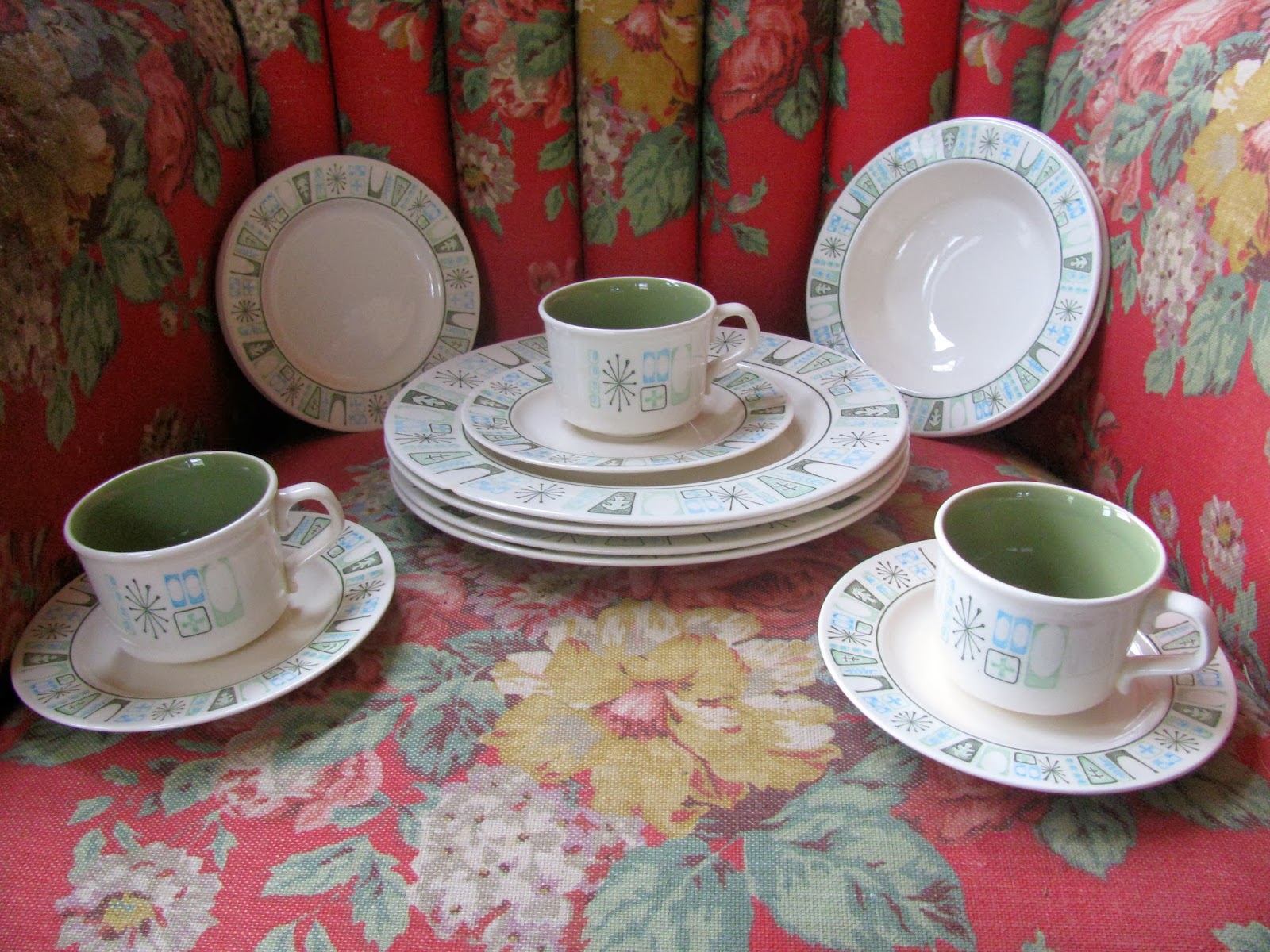 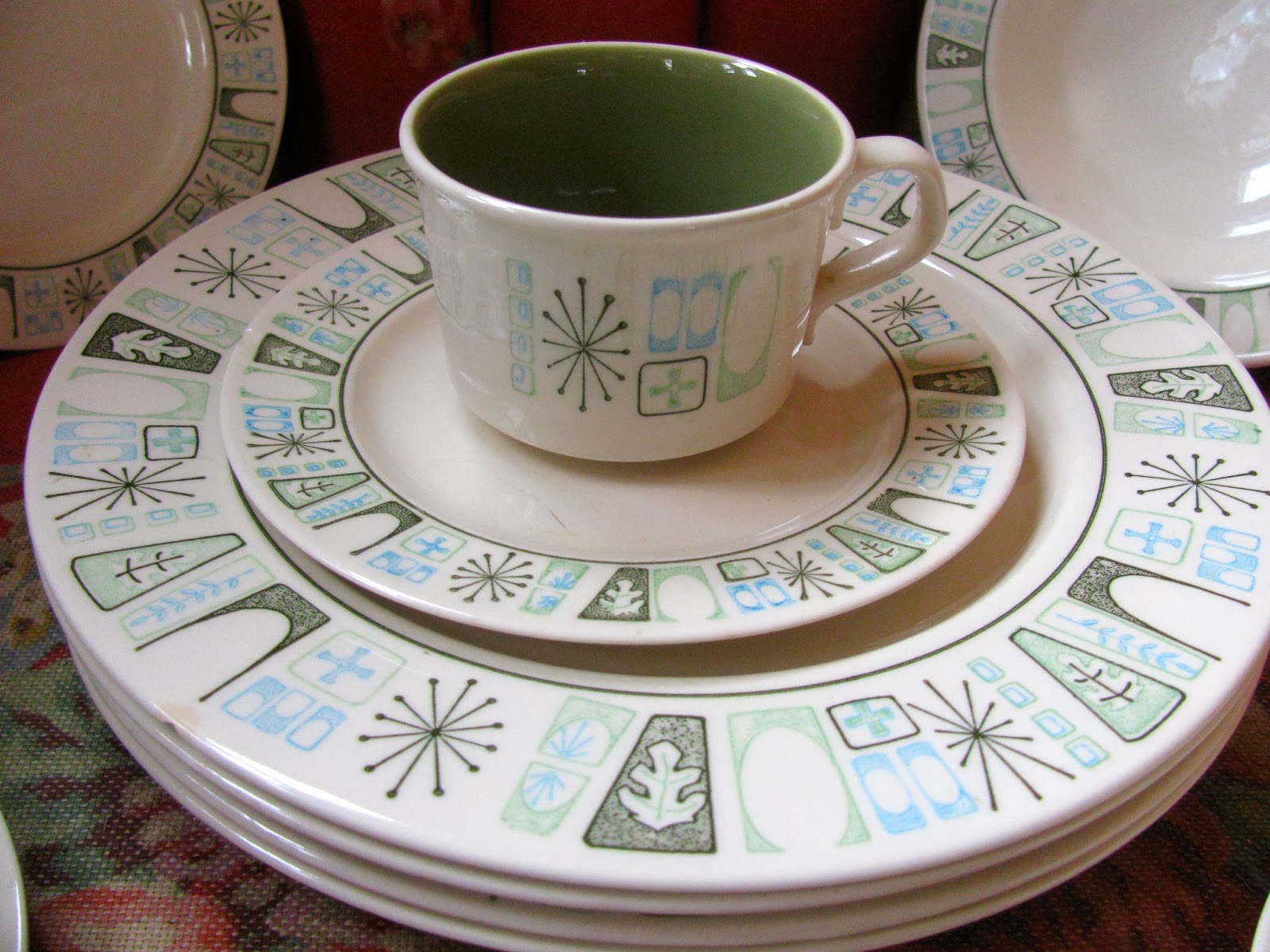 I've found a couple other dishes in this pattern before, so when I saw a good amount of it at a local thrift store I knew I had to get at least a couple of the dishes. Of course I ended up getting the whole set. Unlike Savers and the Salvation Army this thrift store doesn't bundle like dishes so I was afraid it'd be more money than I wanted to spend. But after adding up all the prices It ended up being fairly reasonable. I don't have a complete set but I'm definitely on my way!


As always I'm linking up with A Living Space, Sir Thrift-A-Lot, and Remnant. Be sure to check out all their cool finds too!
Posted by Zorah at 1:29 AM 9 comments: