It's officially 2012! Happy New Year!!!! I hope you all had a fabulous New Year's Eve and aren't too hungover today. I didn't really write down any formal New Year's Resolution, but one goal I have this year is to post more on the blog. 2012 will be my first full year of blogging and I want to post at least four times a month if not more. 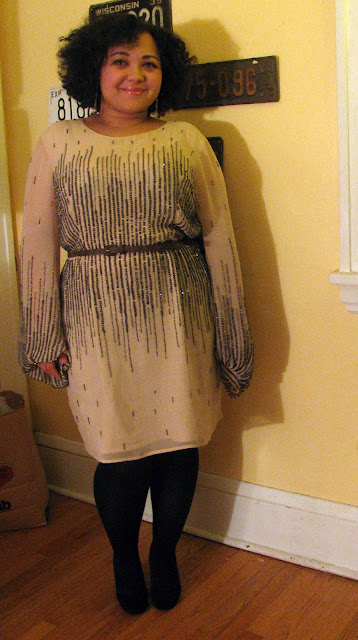 Dress: Asos  Tights and Belt: Target  Shoes: Urban Outfitters
I rang in 2012 at a friends New Year's Eve party then came home and watched Kathy Griffin and Anderson Cooper on CNN. All in all a pretty good NYE. I knew I'd probably wear this dress on New Year's Eve if I did anything. Thankfully the party I went to had a dress code so I wasn't terribly over dressed. I was probably the sparkliest person in attendance, but everyone likes sparkles right?  As I've mentioned I go this dress as a birthday present to myself back in November. It's a tad too big, and I should probably get it tailored, but since I don't really have the money to pony up for a tailor I just decided to belt it and call it a day. I think it looked pretty good in the end and I was able to ring in the new year pretty fashionably, always a plus.
Posted by Zorah at 9:44 PM