Last year my mom and I found about a local event called the Junk Bonanza. It's basically just a big bi-annual antique,vintage, retro, and re-purposed three day shopping event.  We found some good stuff at pretty decent prices last year so we decided to go again this year. I had to work the first two days of the event but Saturday I closed so I had some time to browse and shop. We got there around 11/12 and the place was pretty packed. Things were pretty congested when we got through the gates but it got better as we went. This year it seemed like a majority of the booths had  re-purposed and/or shabby chic type items. Those items were ok but they're not really my style. The shabby chic stuff is a lot of painted furniture (mostly in white, grey and pastels), a distressed look (real or faux, genearlly faux), and florals. It's generally pretty feminine.

The re-pourposed stuff is kinda cool. There were definitely some really cool re-purposed items, but generally I like things to be kept the way they were.

There were definitely some serious trends going on. The "paint something with chalkboard paint" trend has apparently taken off like a rocket, there was a whole booth full of stuff painted with chalkboard paint.  Every time I saw chalkboard paint I thought of the Portlandia sketch "Put a bird on it!" except it would be "make it into a chalkboard!." I don't hate that trend, It's just not for me. I'm not a huge fan of the look of a dusty chalkboard (you know after you erase whatever's on the chalkboard) and constantly wiping down something seems like it'd be annoying. But I have seen it done really well. Anyway there were also a lot of vintage biology posters for sale. I like them but I'd like to find one super cheap, preferably in a thrift store.
There seemed to be a lot fewer antique/vintage booths, which was kind of a bummer. There were a few cool booths, one in particular was really cool with lots of mid-century stuff. My favorite booth had this slightly creepy monkey blowing bubbles that I kind of wish I had bought.
There was also a cool Heywood Wakefield side table in that booth that was cool but I didn't see the price on it. There was also this really cool giant malt mixer. 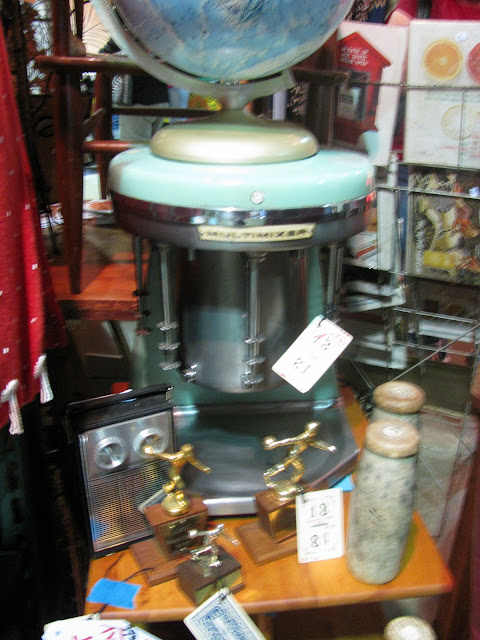 I have to admit I kind of wish I had gotten this guy. His face is so funny and very expressive. But he wasn't in the greatest condition. Maybe next time.
I love old portraits, I thought these were pretty cool. Look at all the cool 40's (?) hairstyles!

This sign was really cool too. I love the colors, but it was a tad out of my price range. But, it's from a local vintage store so If I start to obsess I can always go there and see if they still have it, or some other cool signs.
A cool mid-century light. I love mid-century lights but now that I have a few I'm looking for lights that are a little more unique/cool or that I can't live without. The lights in this booth were cool but fairly similar to the lamps I already have.
Anyway,  we walked around for a bit and saw some cool stuff but nothing we couldn't live without. So after  we made the rounds and saw all the booths we left empty handed. It was fun to see all the stuff people had for sale and some of the re-purposed stuff. But, I didn't see anything really unique. Most of the stuff I saw has been trendy on a lot of design/ vintage blogs for awhile. But it's always fun to see cool vintage stuff. I have kind of a hard time at vintage/antique type stores. They have lots of cool stuff, but for me one of the best parts of getting vintage stuff is finding it in a thrift store or at an estate sale. There's just a high you get when you find it "in the wild" that you don't get in antique malls. But antique fairs/malls etc are great for finding stuff that is harder to find in thrifts like vintage lamps, some vintage furniture and signs. There are also some vintage/antique stores that have pretty good prices. But in antique fairs/malls you just don't get that same high and I always think in the back of my head that I cold find that item for cheaper in a thrift store. Nonetheless I do love browsing antique/vintage stores, though it can be a bit overwhelming, even if I don't tend to buy as much.  All in all it was a pretty good time and we'll probably be back next year.