Sooo I bought a couch. I know what your thinking, why? why did you buy a couch? Well it's cute and mid century and I got 50% off, it was only $30.00. I wasn't looking for furniture but I was at Savers memorial day and they announced that all furniture and electronics were also 50% off until 5pm. So, I casually wandered over to the furniture. I saw a cute mid century highboy dresser but it was painted black and I don't really want to refinish a dresser I'm not in love with. I continued walking around and  looked at the chairs and couch's and then I saw it. 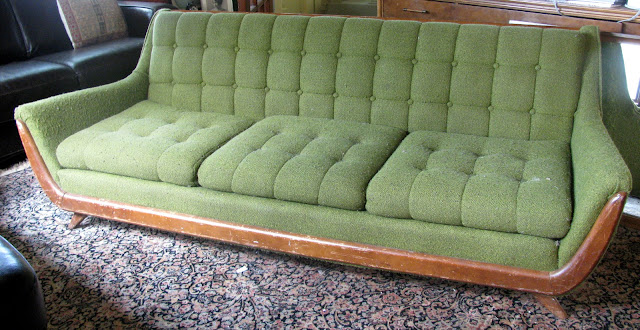 Originally it was $60.00, still a pretty good deal, but with 50% off it was only 30 and It was really tempting. So I thought about it but there was one hitch, It's too big to fit in my tiny car. I called my mom to try and get her to talk me out of it, but she didn't. Unlike the Salvation Army, Savers doesn't hold an item for you for 3 days, you have to pick it up the day you buy it. Savers should really think about changing that. So after lots of back and forth with my mom, circling around the couch like a vulture, giving the evil eye to people who looked/sat on it, we finally got a friend of the family to come with his van to help me get the couch home. He was across town and after the guy helping me told me why they don't hold furniture I was super anxious about my couch. He said people take off the sold tag, buy it and the original buyer is left high dry and out $30 bucks. Luckily no one did that and my couch made it home safe.  Anyway I promise no more big furniture purchases, unless it's Brasilia I don't know if I can say no to that. Anyway from now on if it's not Brasilia and I can't fit it in my car I don't get it. This works since what I really want to find is some cool storage so I can get rid of these two plastic storage bins in my room. Isn't it cute though! When I looked at it part of my rationalization of buying it was that it could go in our TV room. Currently we have two chairs in there but they're not very comfortable and we've gotten kind of sick of them. So, when we eventually clear out the chairs and ready the room it'll be in there. 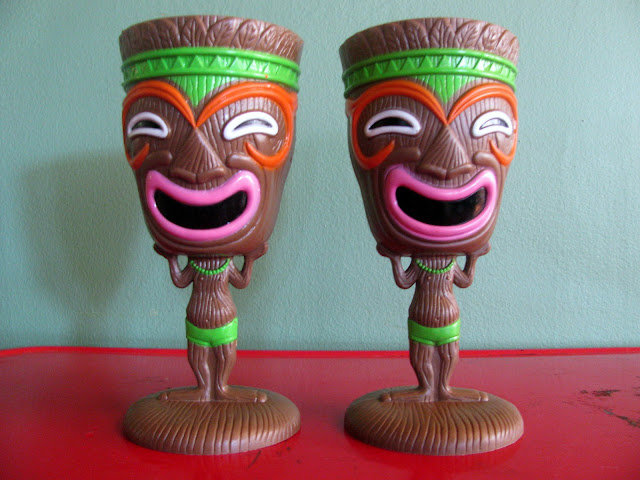 I also got these cool tiki style cups/goblets. I looked them up and I guess they're from Party City, I knew they weren't old when I got them since they're plastic and say made in china. Vintage or not I still think they're cool. I'm usually looking for vintage tiki stuff but these were cheap and cute so I figured what the hell. I always thought I never found any good tiki stuff at thrift stores, then while searching for tiki stuff online I found out I've been seeing it a lot and just didn't know it! So if your into something it never hurts to google/ebay it.

I did find a cool Cynthia Rowley kimono-ish top but I put it and the cups down to measure my car and when I got back it was gone. I found the cups again but the shirt was gone. Maybe next time. I didn't really find anything else memorial day, I only ended up going to two stores. I was planning on going to more but I started late and the whole couch debacle took up a lot of time, by the time I got the couch home most of the other stores I was going to visit were closed. Did you find anything good this memorial day?

*Also, I decided not to post the photos to the photo-a-day challenge everyday and instead will do a roundup of the weeks pictures every Saturday until the end of the month.

** Also linking up with Her Library Adventures' Flea Market Finds .
Posted by Zorah at 2:23 PM