If you like television like I like television, which is perhaps a bit too much, then you're probably just as psyched for the return of Mad Men today. I didn't actually start watching Mad Men until 2010, I'd heard so many good things about it and its style but just hadn't put in the time to get into it. Anyway I totally got sucked in and quickly caught up on seasons 1-3. So, when I heard last year Mad Men wasn't returning until 2012 I was bummed.  Though I tried to quell my thirst for the Drapers with sub-par 60's dramas (*cough* Pan Am *cough*) there's nothing like the real things, and I'm glad It's finally back! So of course I had to do a Mad Men post in celebration of the 2 hour season premier tonight.

Mad Men is pretty well known for it's style so what better way to celebrate its return then through a post celebrating the style of it's leading ladies. 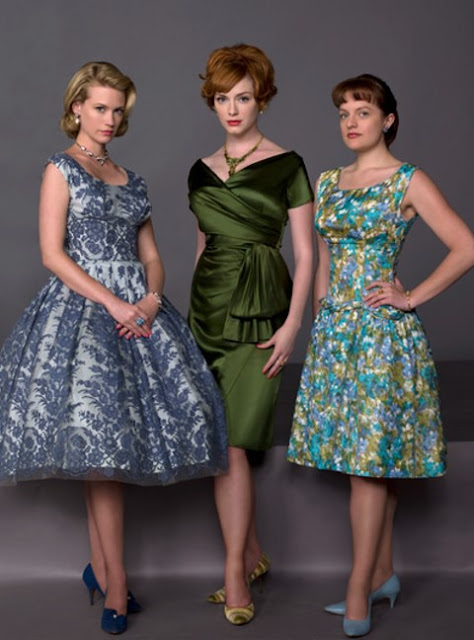 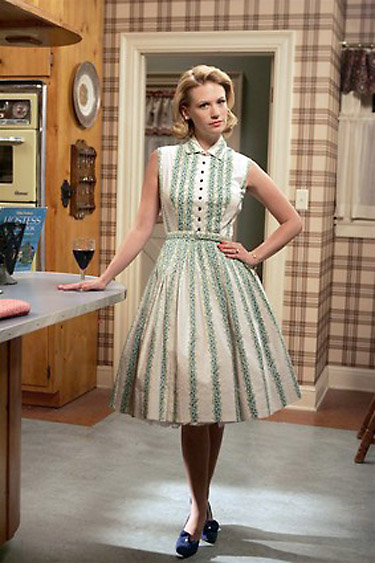 First up is Betty Draper ex-wife of Don, disgruntled housewife, and WASP. In other words the ultimate 1950's housewife. Mad Men is of course set in the 1960's but Betty's style is most definitely informed by 50's fashion, including the classic 50's circle skirt silhouette. When she's not in a skirt or dress she goes full WASP in her classic equestrian chic look. 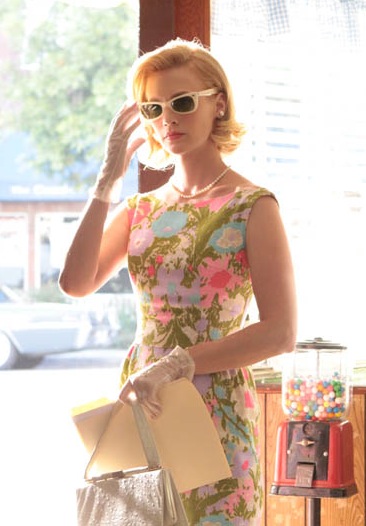 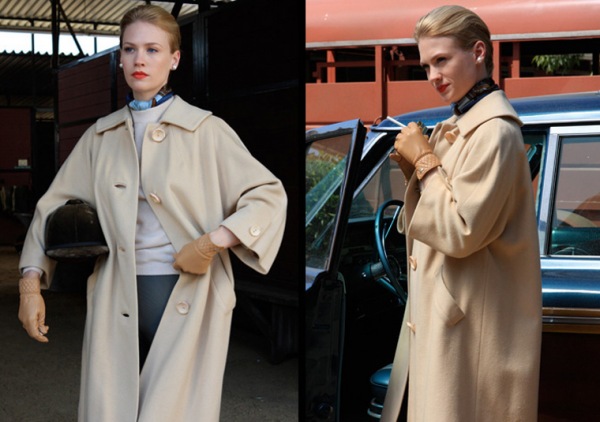 Anyway here's my take on Betty's look. This is actually my Halloween costume from 2010 when I went as a 50's housewife.  Betty's look is very 50's housewife with pearls, circle skirts, cardigans and heels. She is always dressed to the nines and never skips a beat, even when she's sad Betty. 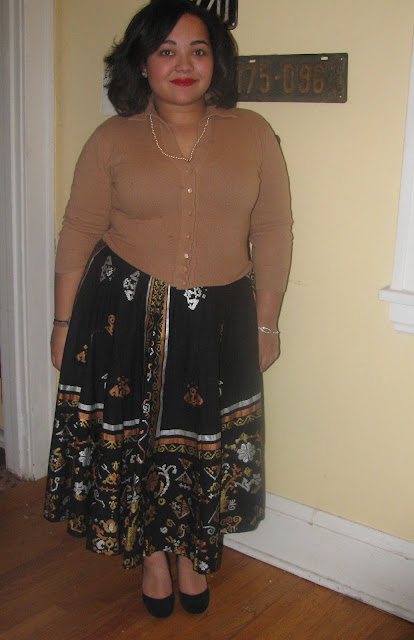 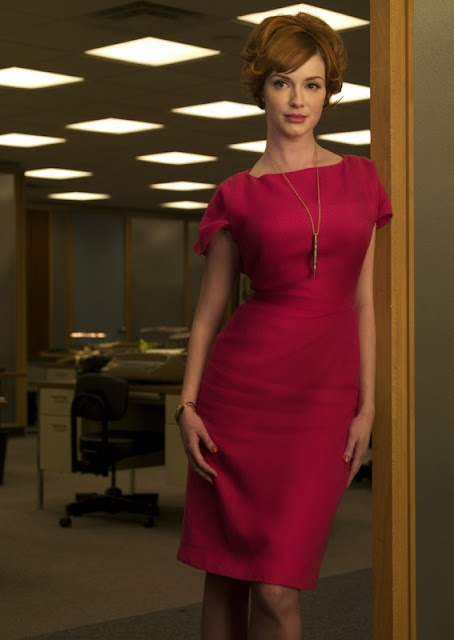 The second and probably most iconic look of all the female Mad Men Characters is Joan. Sassy, in charge and sexy Joan is the office Marilyn and always dresses the part. With Christina Hendircks' fabulous curves Joan's style is sleek, tailored and sexy. Joan is an ace at knowing what works for her body. Unafraid of color Joan's look incorporates bold color with slim silhouettes that accentuate her tiny waist and lovely curves. 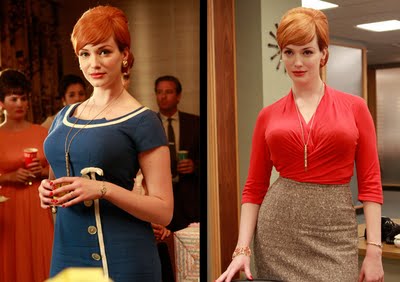 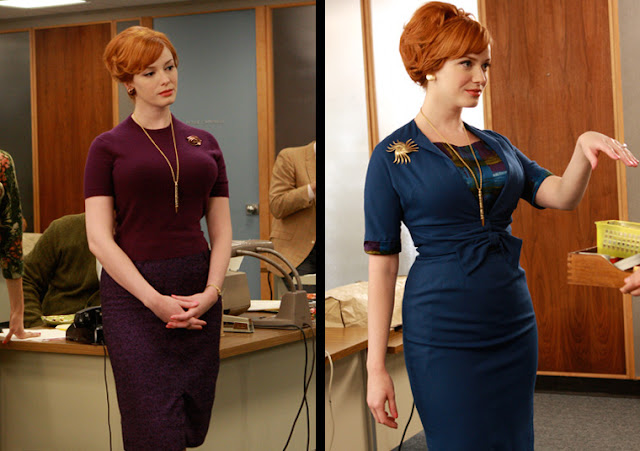 I have a couple looks that would work for Joan but I haven't blogged them yet and want to save them for future posts. This entry from the skirt challenge, though, works equally as well.  What makes it very Joan to me is the pencil skirt, bold color and highlighted waist. When letting out your inner Joan highlighting your curves is of the utmost importance as is incorporating solid bright colors. 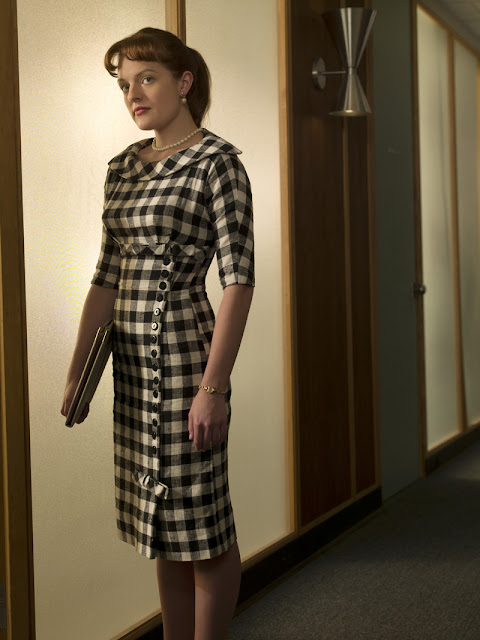 Finally we have Peggy the smart, modern, working girl carving out a place amongst the men at Sterling Cooper Draper Pryce. Peggy's style is very 50's school girl but seems to be evolving into a bit more of a mature style, with a few school girl touches. Despite being in her 20's her style is fairly Juvenile. Peggy is often shown in more muted tones with bold, simple patterns and higher necklines. 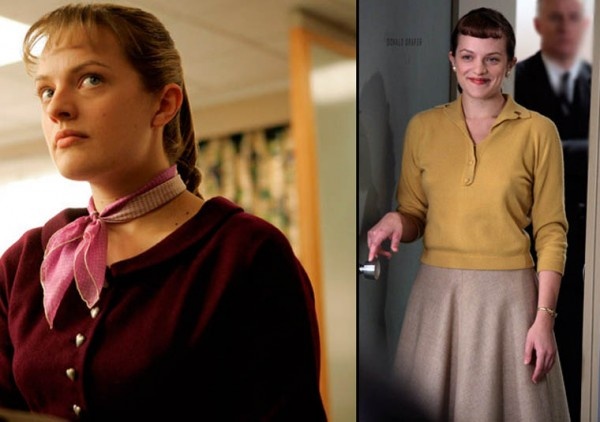 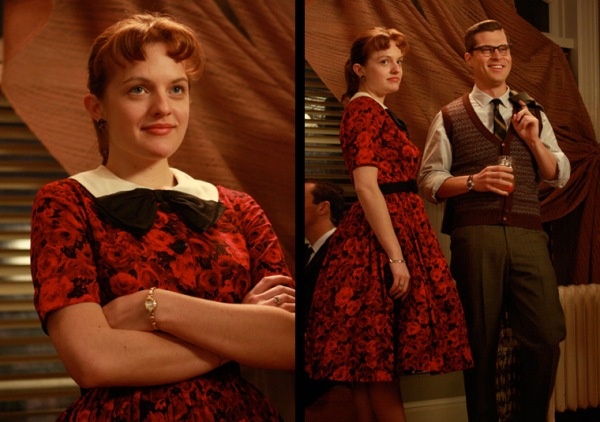 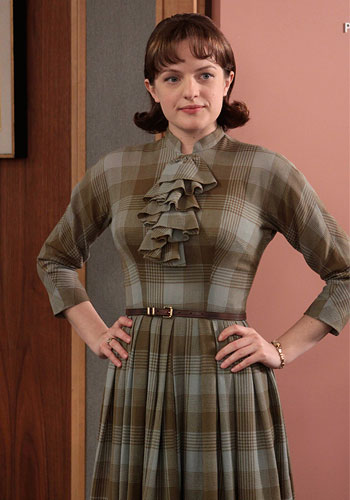 Peggy's style is the hardest to translate for me but I think this dress works well. Peggy doesn't work as many brights solids as Joan but she's sort of the middle point between Joan and Betty. Peggy incorporates both full and pencil skirts, bright and muted colors and a variety of patterns. Though it's a tad brighter than Peggy's general palate and the neckline is a bit lower then Peggy's normal ware I think this dress works fairly well for a Peggy look and it's also my OOTD for today. 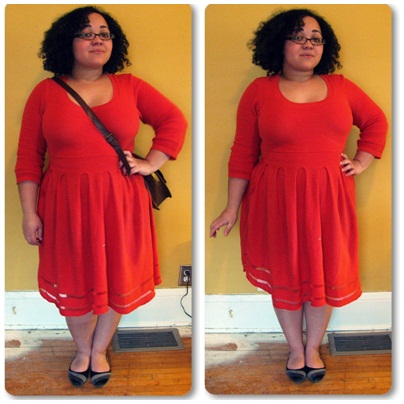 
And just for shits n' giggles I had to add a picture of my favorite male character and silver fox on the show, Roger Sterling. Le swoon. 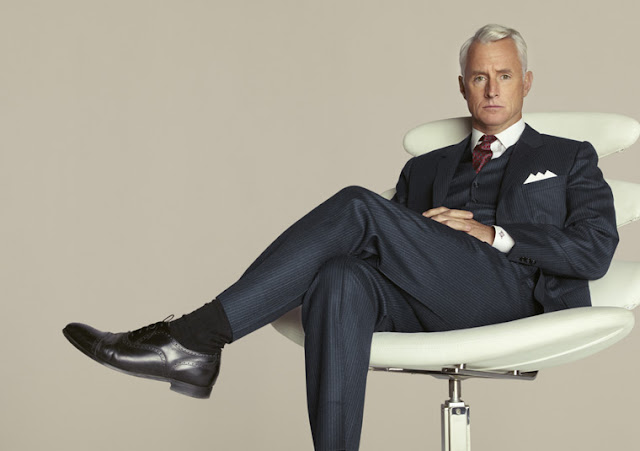 *all Images via google images and AMC

Whose style do you like the best? Which TV characters do you wish you had full closet access to?
Posted by Zorah at 7:13 PM