While trying to figure out a Halloween costume this year the idea of being Cleopatra dawned on me. I've been slightly obsessed with ancient Egypt for practically ever and somehow managed never to dress up as Cleopatra for Halloween. This probably has something to do with the fact that I've never been that big a fan of Cleopatra. My favorite Egyptian Pharaoh has always been Hatshepsut , because let's face it she was a bad ass. But, Shakespeare never wrote a play about her and no one made a movie about her badassery so though I could (and may at some point) dress up as her I have to imagine most people wouldn't get it. So when contemplating my possible Cleopatra costume I didn't want it to be the run of the mill Halloween store costume, I wanted to be Cleopatra a-la Elizabeth Taylor. Why the Liz Taylor Cleopatra? Well it's all the ancient Egyptian makeup, hair and jewelry you could ever want with amazing ancient Egypt meets the 50's/60's fashion, behold: 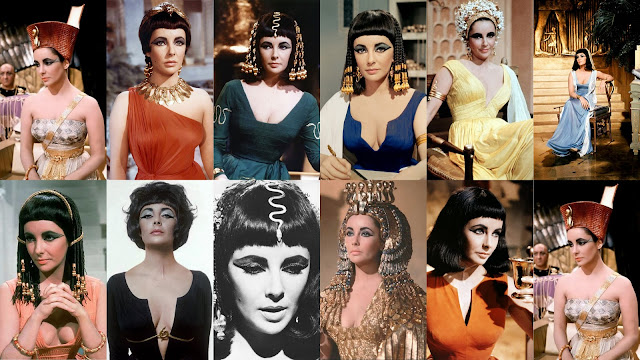 Alas putting the ultimate Liz Taylor as Cleopatra costume of my dreams just wasn't in my budget, so next year I'll totally be Cleopatra. In the meantime I've been inspired to work some of Cleo's style into my everyday rotation. So, I've been obsessing over gold jewelry, especially collar necklaces, and 50's/60's style knit and Grecian dresses. So far these are my favorites:

And since I can't get this song out of my head whenever I think of the name Cleopatra here's a little late 90's throwback.