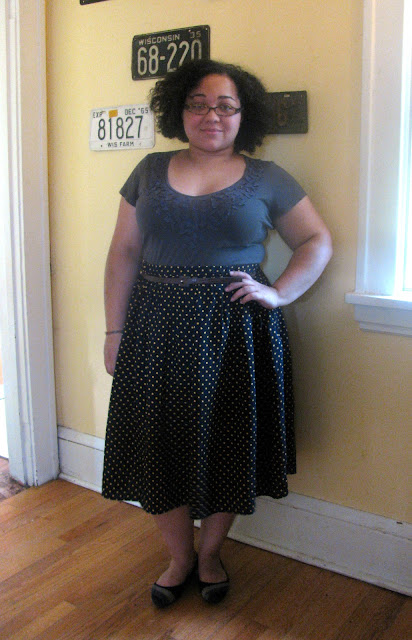 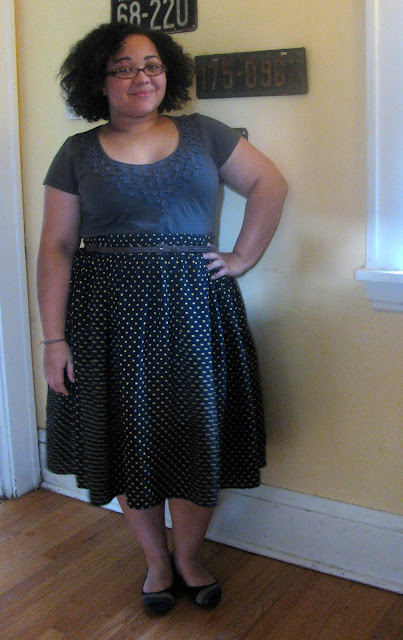 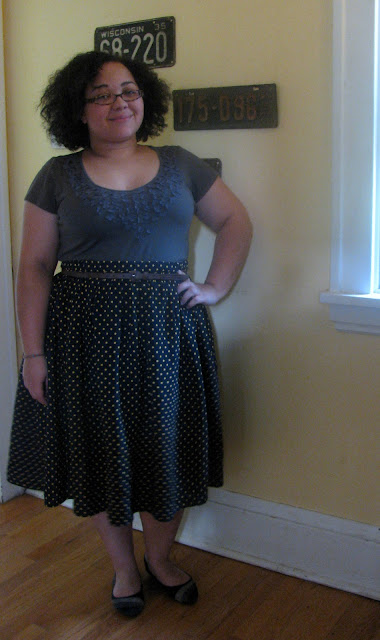 This is probably one of my favorite outfits of the whole skirt challenge. I've worn this outfit, as is and in a variety of different incarnations, way more than I should have since getting the skirt. I got this skirt two weeks ago in Eau Claire, WI when my mom and I randomly took a mini road trip to the Leinenkugel Brewery in Chippewa Falls, WI. Despite it being early September, all the Halloween stuff was out and of course that means the vintage rack, that usually is pretty lack luster in the Savers I usually frequent, was stuffed. I found this skirt there, it's navy blue with little yellow stars on it. Surprisingly it's super on trend, it's not only a midi skirt it also has one of the trendy prints of the season, stars. At first I was going to pair it with the bright yellow shirt I wore for the color block challenge but I just wasn't feeling being that bright. So I paired it with this lovely grey t-shirt that I paid a little too much for at Unique Thrift Store, but loved too much to not get it. I like the color and the fact that it has some interesting texture/pattern to it, something that makes it a little more interesting than your regular grey t-shirt.
I wore this outfit to go to an Estate Sale in Austin, MN. I had seen a sale online and it looked like it had pretty good stuff  and my mom and I are always up for a mini road trips, as long as the weathers nice, so we got up early and went. It took about two or so hours to get to Austin and well we probably won't be going back. We went to the Estate sale and everything was ridiculously overpriced. We came on the last day of the Sale so everything was 50% off but there was still a lot of stuff despite the fact that it was the third day of the sale. I found some clothes I was interested including a black 80's dress with a sequin embellished neckline. But, when we went to check out the lady told me, very rudely, that instead of being $2.50 the dress would be $20.00 because it was embellished. Turns out the rack where I had gotten the dress had other 80's embellished sequin tops and that dress and instead of originally being $5.00 like the rest of the stuff on the rack they were $40.00 or so because of the embellishment. The problem? they're ugly 80's sequin shirts! They're not in style and only some people are really interested in wearing them in a sort of ironic-y fashion. I have a similar old lady 80's sequin cardigan that I bought at the Salvation Army for like $3.00.  Needless to say the prices were ridiculous and I wouldn't be surprised if they still had a bunch of stuff left over after the sale ended. Anyway after that we explored Austin a bit, which kinda smells like Ham/Spam due to the Hormel plant near by. The town was ok and we ended up stopping for lunch at a Mexican Restaurant that was nice. But after that we decided to split. The lovely interactions we had with the ladies at the sale left a bad taste in our mouths so we left and went back home. When we got back we went to another Estate sale in a town closer to home and found some really cool stuff which we ended up paying a total of $40.00 for on the last day of the sale, way less then we would have spent at the sale in Austina and for way better stuff. Guess we won' be going to anymore Estate sales in Austin.
Posted by Zorah at 10:41 PM